I get a lot of conflicting advice online about how to install video card drivers. What are the differences between the main ways of installing the drivers, and what is the simplest way to get this done?

The above command installs the latest drivers, but you may want to use a prior release, depending on how well your graphics card is supported. There are a few manual methods. I'll walk through some of the more prominent.

In menus, you can click on "Applications" in the upper-left corner of your screen and type to search for "Software & Updates". You can install proprietary drivers in its "Additional drivers" tab. 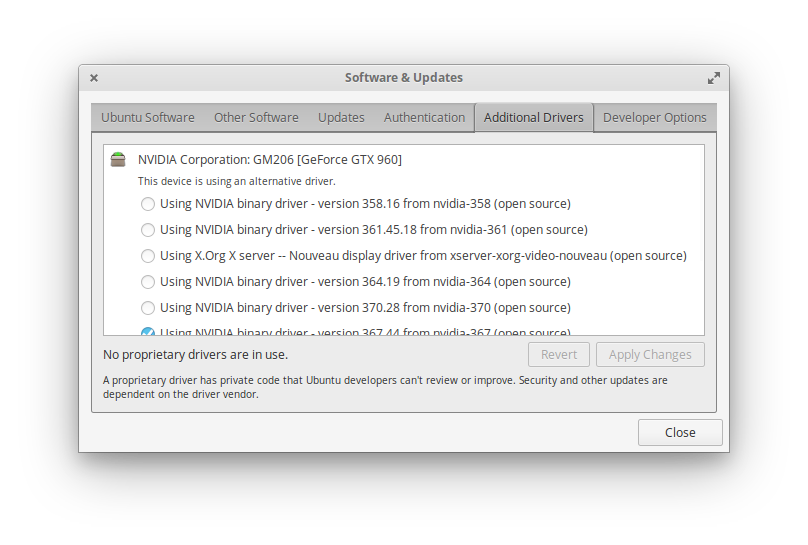 For more control/specificity, install via the command line.

First, you'll want to know the name of your graphics card: lspci -k | grep "VGA"
You could also run sudo ubuntu-drivers devices to see all connected graphics devices. (The latter will show the recommended version.)

The manufacturer might recommend specific drivers or a specific version of the driver. Look it up on their website. Note the difference between the driver they recommend (the long-lived branch) and their latest release. You can either walk through the steps of their linked installer or, more simply, use the PPA (how to install PPAs in Loki) if you want to install a specific driver version (e.g., nvidia-###):

(If you Tab twice after typing "nvidia-" in the above command, Terminal will list all possible packages with that prefix.)

Other tutorials might mention graphical means for installing drivers, but the more you futz with commands (e.g., following the nvidia website's directions), the more opportunity you have to screw up the install. This said, if the simple driver install causes issues, you'll fall back on the manufacturer's install (sudo apt-get purge the packages you installed and godspeed).

Loki does not come with "Software & Updates" installed.

You can install it by running the following command:

Not the answer you're looking for? Browse other questions tagged graphic-drivers graphics or ask your own question.

26
How can I add a PPA in Loki?
9
How can I re-install the Software & Updates app?
4
Screen tearing when logging from hibernate or suspend
5
How to install correct AMD drivers?
0
HDMI completely broken in Loki?
0
Soft lockup and delayed boot
0
Laptop has one bad and one good graphics card