Installation of freya 0.3.2 seems to have worked quickly and without problems. However, I cannot shutdown the system without having to use the power button. The problem looks similar to this one

because the last line of output is essentially the same. I've tried this fix

which seemed on point, but it didn't work. Now I suspect it might have to do with the graphics card (not sure though) because when I shut down the machine, the following happens:

There the shutdown process stops. When I hit the power button, the machine powers down (I don't have to hold the button), and the output looks like this: 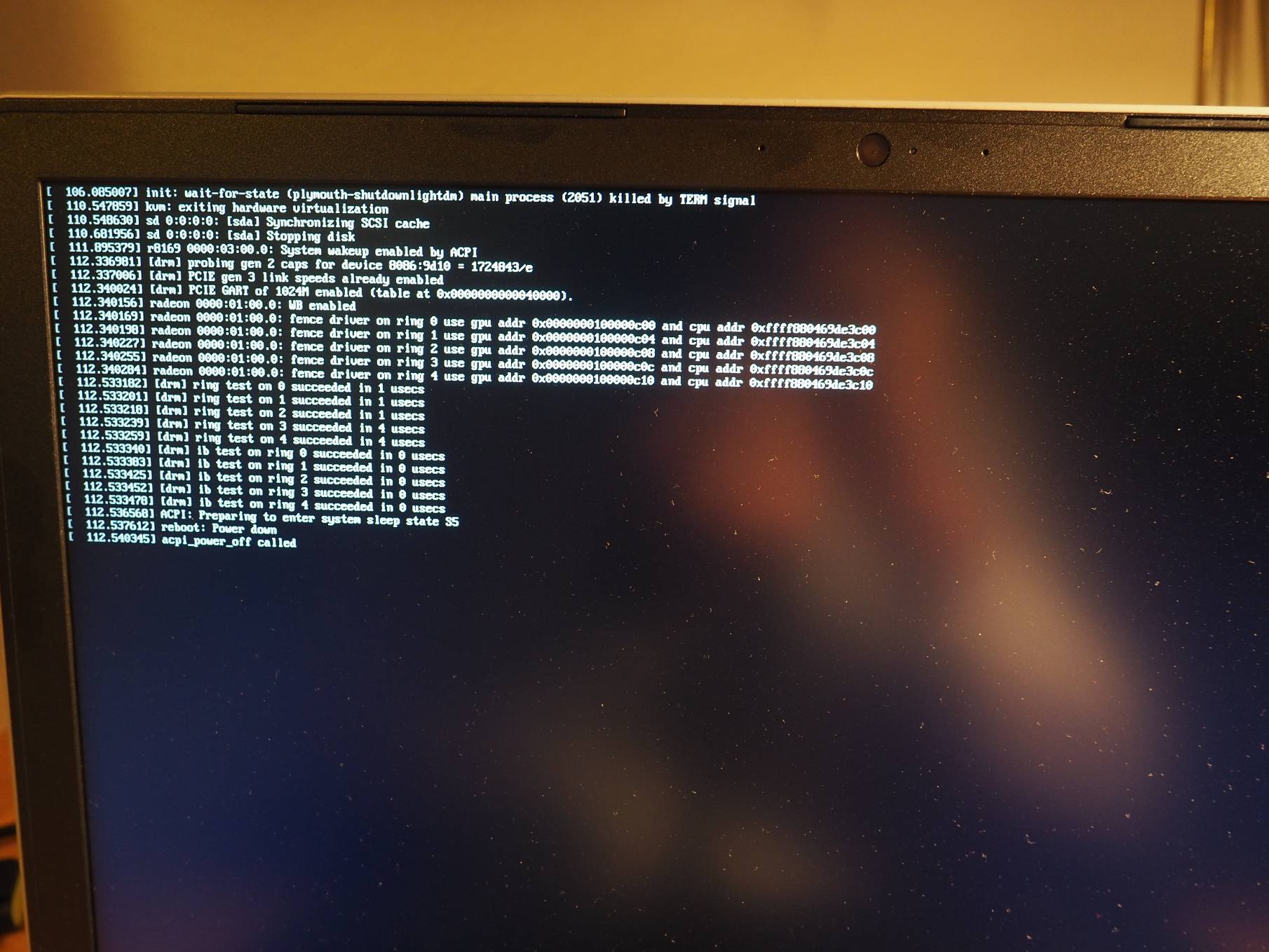 So far I have used the Xorg open source drivers for AMD cards that came with freya, although the system mistakenly identifies the graphics card as being an AMD Sun XT (Radeon HD 8600M series). When I switched to the proprietary fglrx driver that shipped with the system, I could merely boot into a black screen with a colored line at the top.

Irrespectively of the AMD drivers, when I have a look at the info tab in the system settings, it says "Graphics: Intel Corporation Device 1916 (rev 07)". When I run lspci -nn | grep VGA, the output is:

The problem also occurs at logout, but in this case the process stops at the screen in the first picture.

Now I have experienced the shutdown/logout to stop at the first graphical glitch without going to the output screens, too. In that case, I have to force quit and power down by holding the power button.

Now there's an error message at startup that seems to be related to the problem. The error description looks like this: 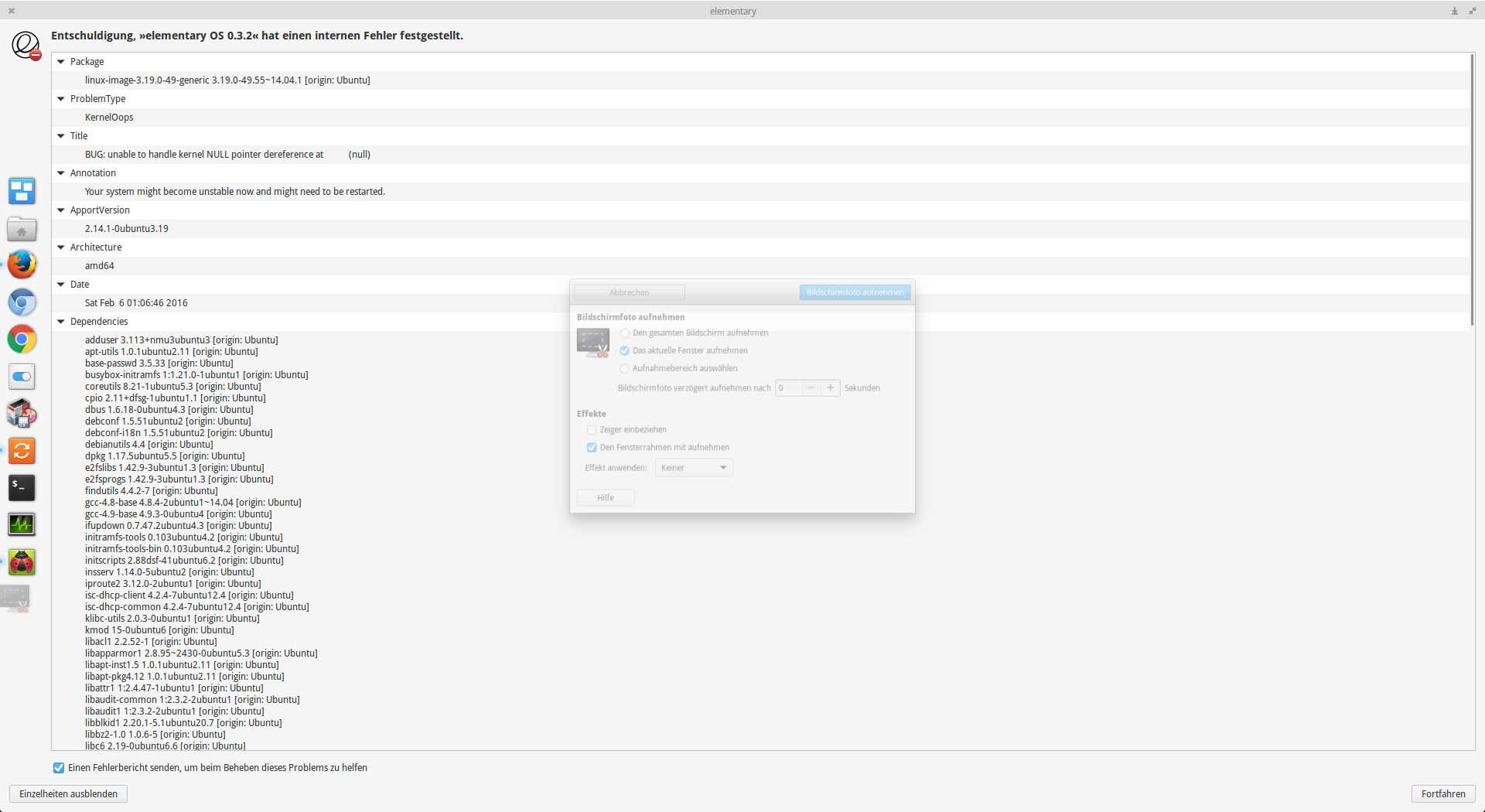 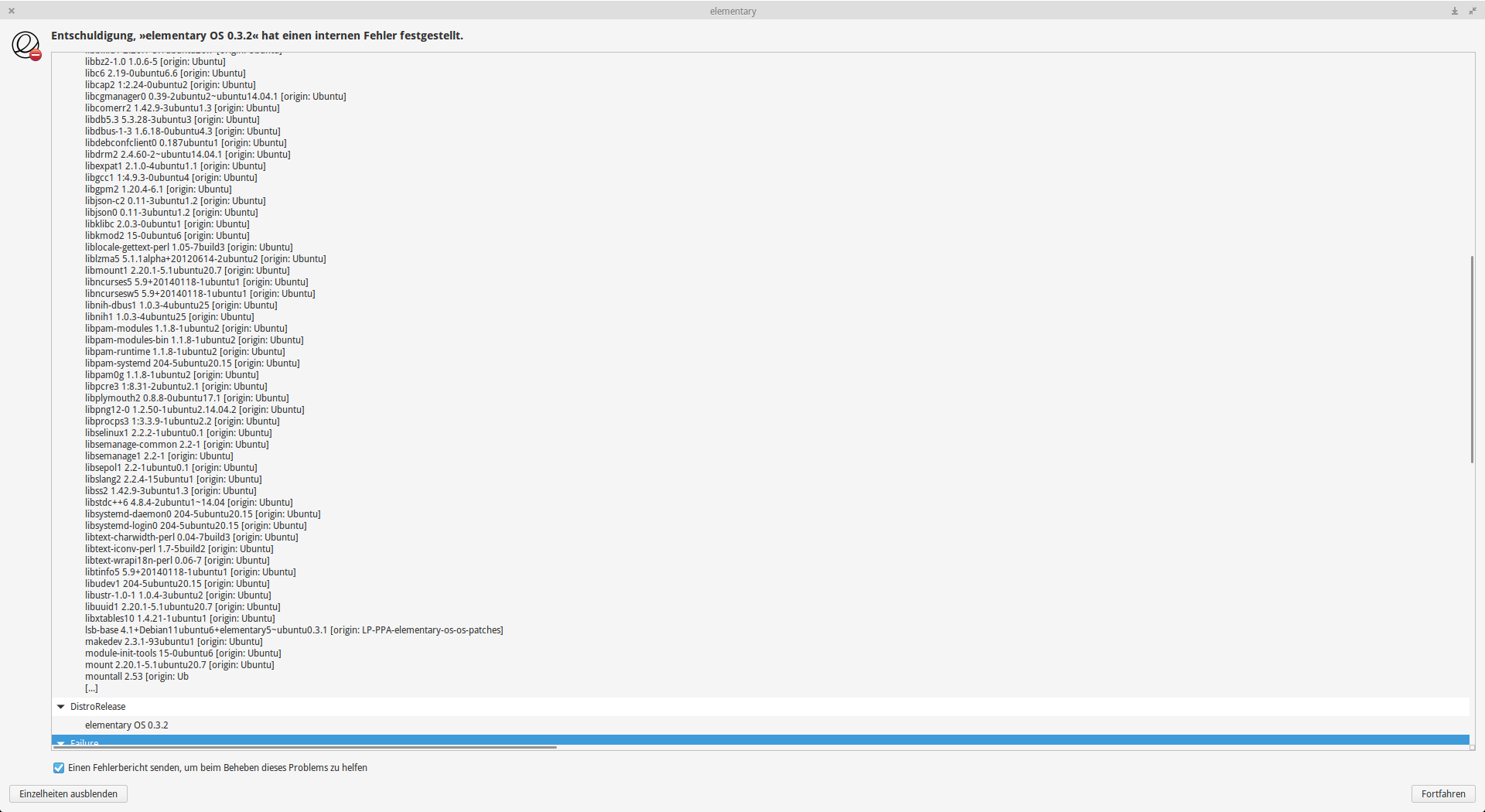 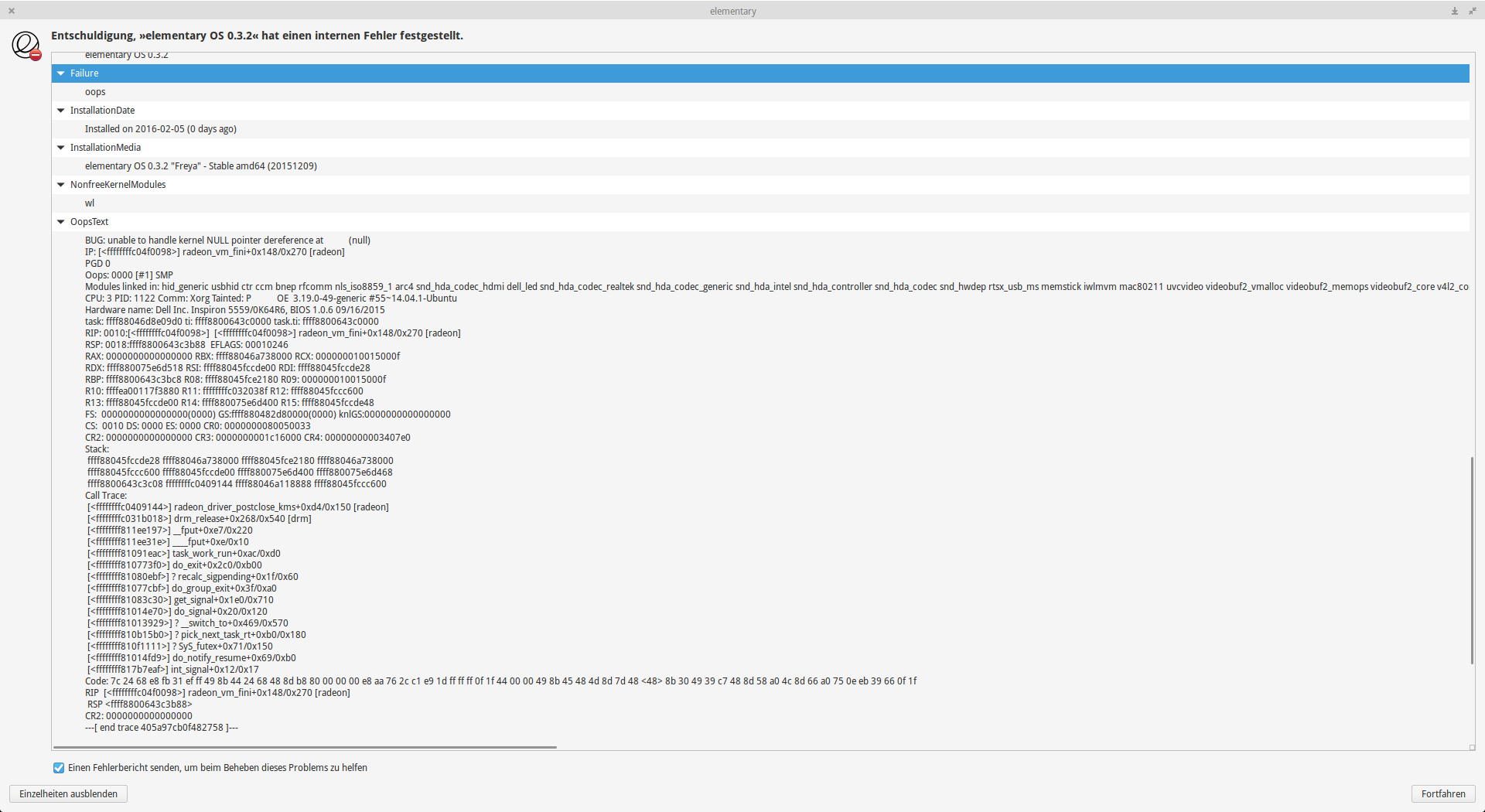 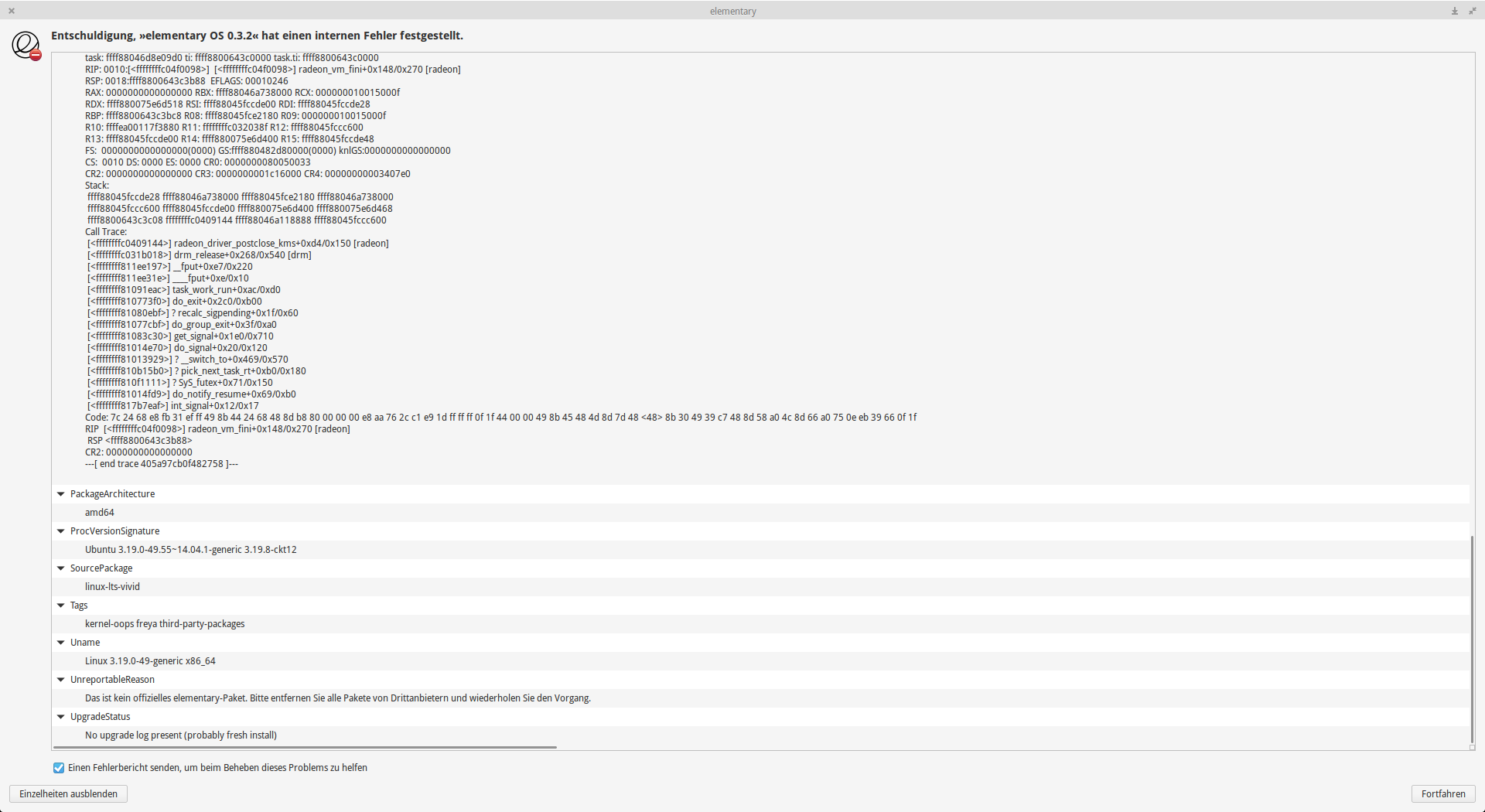 The entry under "Unreportable Reason" (strangely the only one in German) translates to: "This is not an official elementary package. Please remove all third-party packages and repeat the process"

I thought fglrx drivers had been included in the system installation because in the additional drivers tab I had these options: 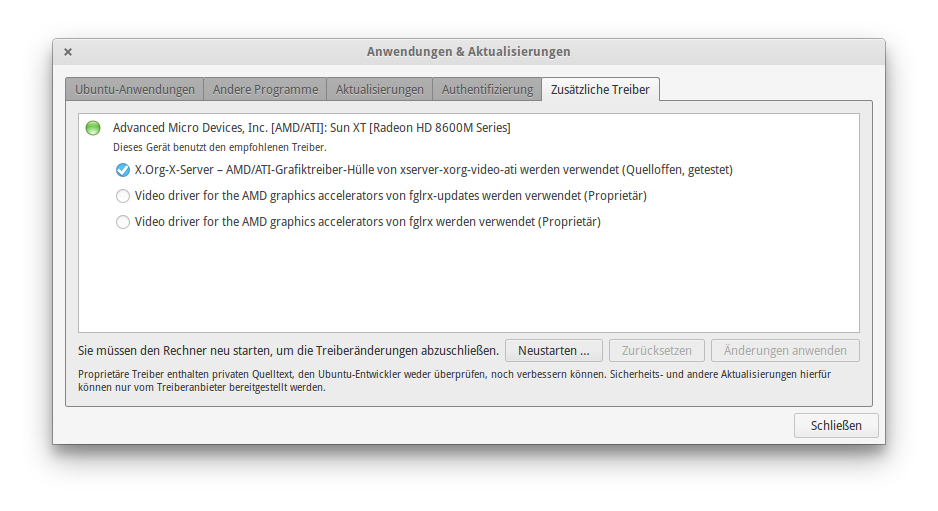 However, searching for fglrx in synaptic revealed that apparently there are no such driver packages installed: 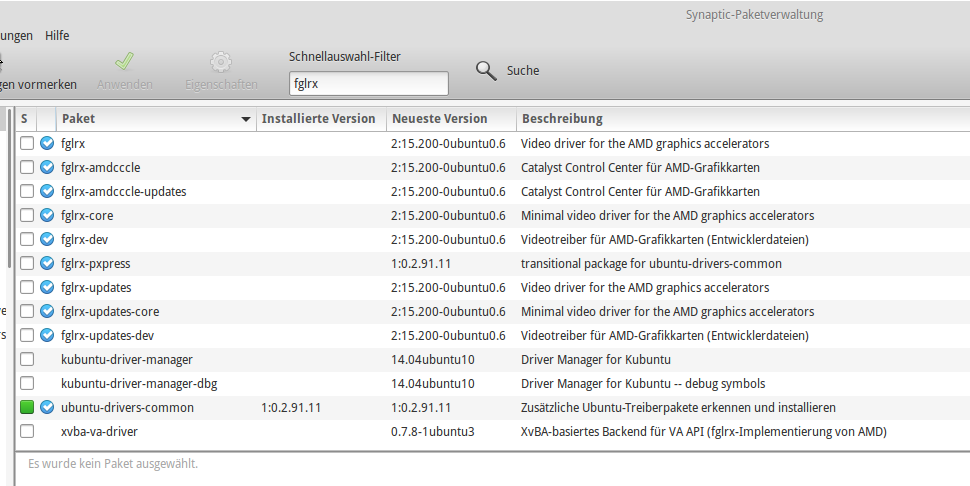 So the problem might as well be related to the Intel graphics chipset that apparently is run right now?

I found the solution. The problem is a driver issue with the Intel Skylake graphics chipset. You can solve it by upgrading to kernel 4.3 and upwards. For instructions to update to kernel 4.4 see here: http://ubuntuhandbook.org/index.php/2016/01/how-to-install-linux-kernel-4-4-in-ubuntu/

The only problem is that now there are some random graphical glitches appearing from time to time. It is kind of annoying, but doesn't affect functionality in any way. I guess the drivers for Skylake graphics aren't fully developed yet.

It looks like updating the kernel as described in the abovementioned article bears some risk: http://shnatsel.blogspot.de/2013/12/why-you-should-not-upgrade-kernel-on.html

I couldn't tell because I don't know enough about Linux. See for yourself :)

OK, so the problem can be solved much easier than installing a new kernel - namely by activating the proprietary drivers for AMD Radeon graphics card (called fglrx). You can choose between fglrx and the open source xorg drivers in the additional drivers tab of the update settings. After fglrx has been installed, the problem doesn't occur anymore.

So it looks like either the Xorg drivers - which are activated by default - do not work with an AMD Radeon M335, or the problem is the Intel Skylake graphics chipset because the AMD card isn't detected/activated at all without the fglrx drivers (this might be the case because when I ran "lspci -nnk | grep "VGA\|'Kern'\|3D\|Display" -A2" the AMD Radeon card wasn't detected at all, but I can't tell for sure).

3
How to take screenshots at shutdown?
2
How to reinstall the default graphics driver after failed fglrx install?
0
AMD Radeon R5 M335 GPU not detected correctly?
2
Problem after suspend / black screen (Intel Skylake)
0
Steam installed but doesn't launch
2
Taking time on Shutdown and when boot after that then the just logo flashes