How To Install Steam?

I'm getting the following errors:

Package libgl1-mesa-dri:i386 needs to be installed

Package libgl1-mesa-glx:i386 needs to be installed

Package libc6:i386 needs to be installed

You are missing the following 32-bit libraries, and Steam may not run: libGL.so.1

First you need to configure a new foreign architecture to install steam.

Now, sudo dpkg --print-foreign-architectures #now this should return i386

Make sure trusty-updates is enabled in Software & Updates 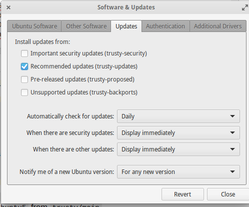 In the most recent version of Elementary (6, Odin) I installed Steam using the Flatpak version and it worked well. The problem was that when I wanted to use Steam Play (trying to emulate Windows using Proton) my game wouldn't launch (I was trying to play The Secret of Monkey Island Special Edition.

It turns out Proton doesn't really play well with the Flatpak version of Steam, so I had to install Steam from the official .deb on https://store.steampowered.com/about/.

Installing via the .deb (I used Eddy) leaves a bunch of dependencies out. Here's what worked for me:

And for the 32-bit drivers

I hope this helps anyone trying to install Steam in 2021.

Download and install the latest drivers from NVIDIA. During the NVIDIA driver installation it asks if you want to install the 32bit libraries. Select yes.

Not the answer you're looking for? Browse other questions tagged release-freya steam or ask your own question.

1
Steam Installing but not running

1
Cannot start Steam
1
Unmet Dependencies and Broken Packages
1
Steam Installing but not running
1
Steam cannot be installed because of missing 32-bit libraries
0
Steam does not run
0
Steam installed but doesn't launch
2
Steam in Juno- how to install
1
Cannot run Steam; missing libc.so.6
0
How can I install 32-bit libraries on Elementary OS 6 Odin?