Then I started the installer, which asks me for the password to unencrypt (luksOpen) my drive and nothing happens after it. 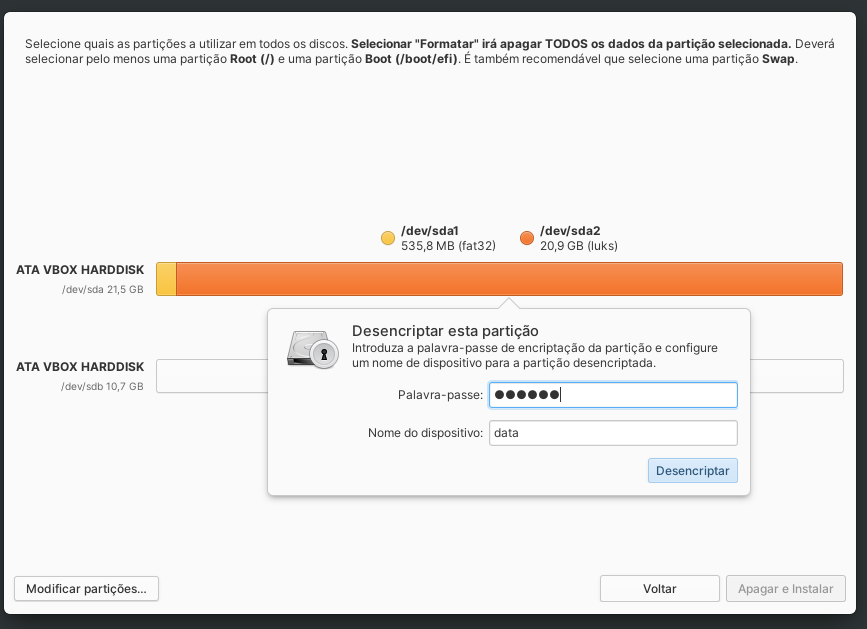 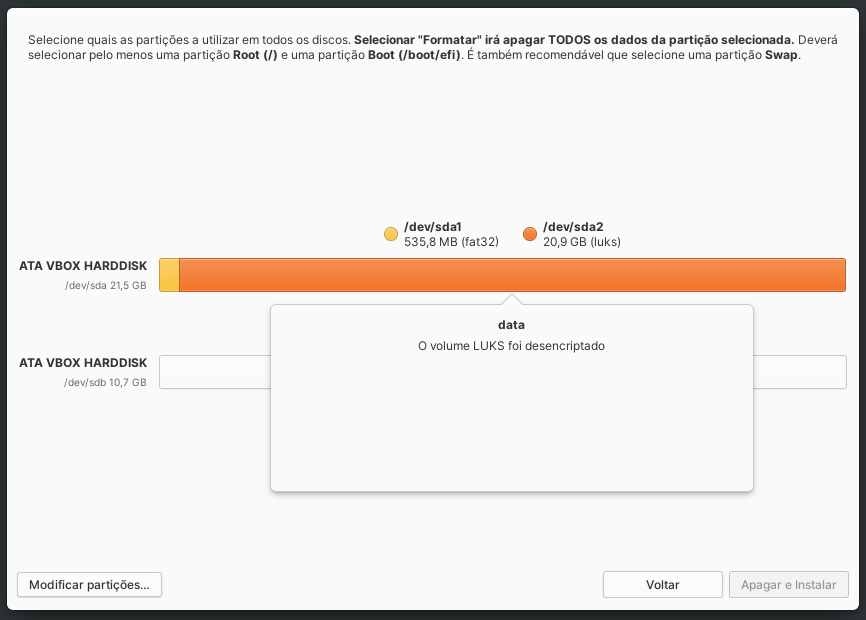 I have observed this issue as well.

Forgive, me, I'll be documenting a lot of what I've done in order to benefit future users and also so that I have a canonical source on how I do this as I'll be installing Odin on two other systems shortly.

I have hosted this in a Gist if this is too long for an answer. You might also be wondering how I know all of this, and all I can say is 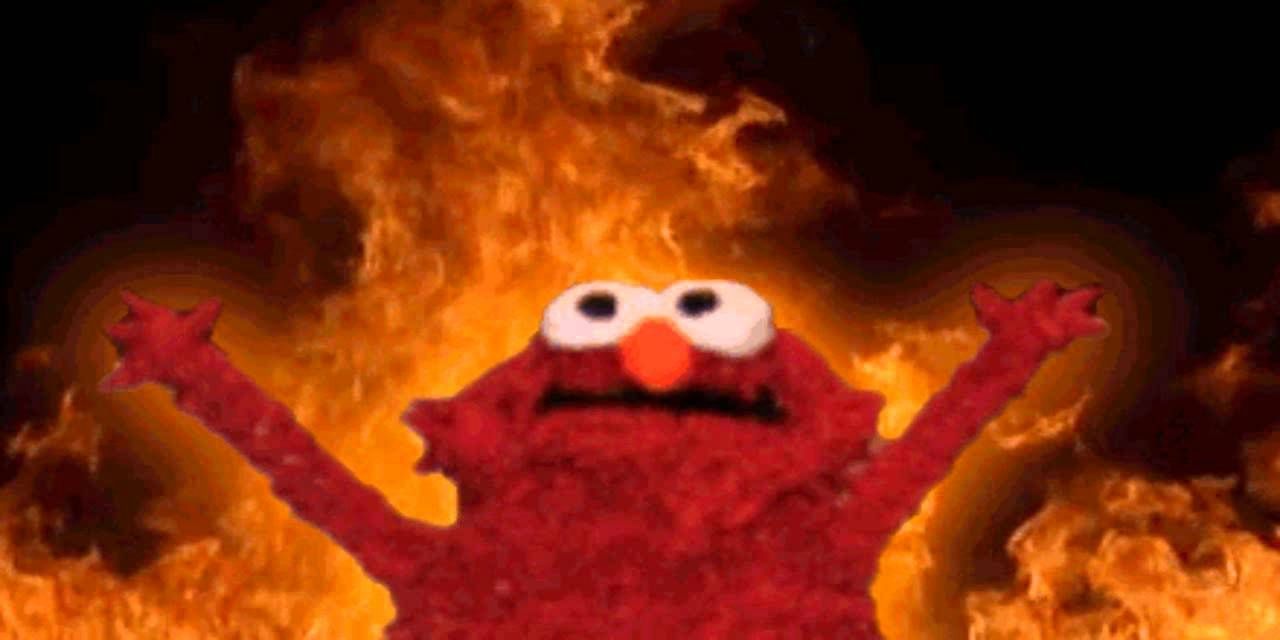 I have suffered hundreds of hours over the years to achieve this setup, and I'm too far in to question whether it's worth it, but the benefits of full-disk-encryption, BTRFS compression and subvolumes, rEFInd, etc. are worth it for me.

⚠️ NOTE: Most of this entire history section is no longer working, but the steps are still relevant for the actual answer at the bottom.

I have a complicated disk setup, not using LVM but using BTRFS for multiple subvolumes (with compression) so that I reduce the amount of read/write on the device and increase the amount of storage space. I won't go into that right now, but it's something I've been doing for a while and ubiquity (the previous, Ubuntu installer), would actually allow you to do what you're discussing above, elementary OS Odin does not. I'd also usually pass a flag to tell it to not install a bootloader, as I like to use rEFInd, which is much prettier and nicer to work with than grub.

Note that when I use $LUKS_UUID, I mean the output of blkid -s UUID -o value /dev/nvme0np3); when I open the device, I give it a name luks-$LUKS_UUID, yielding a device path of /dev/mapper/luks-$LUKS_UUID; when I use $ROOT_UUID, I mean the internal BTRFS filesystem UUID acquired via blkid -o UUID -s value /dev/mapper/luks-$LUKS_UUID; I also assume EFI, so $EFI_UUID is the FAT32 partition's UUID for /dev/nvme0np1, and I assume that a second partition exists for hosting the initramfs and other boot stuff at /dev/nvme0n1p2 (filesystem choice largely irrelevant but I use BTRFS) and I'll use $BOOT_UUID to reference its UUID.

The way to get it working before was:

chroot and Configure the System

After running the installer, it then became necessary to chroot into the machine's filesystem, so:

Bonus points: since the installer most likely did not mount with compression enabled, now would be a good time to compress the filesystem recursively, as doing it in a live system is probably not a great idea, so:

This compresses the filesystem using LZO, which is a good middle ground compression algorithm, not too CPU expensive, with decent compression overall.

Next: chroot /mnt and if you did everything correctly, you'll now be living virtually inside of your install, so you'll be able to do customization here.

⚠️ From this point on, you are now inside your elementary OS install. I'll let you know when to exit it.

The installer never quite got /etc/fstab right, so install an editor and edit /etc/fstab:

Be sure to replace those variables with your actual UUIDs.

I wasn't exactly sure how /etc/crypttab worked, it usually didn't seem to do anything at all for me, but I'd always set it up anyway perhaps out of paranoia:

Install the rEFInd PPA if you want a nice graphical boot manager that's easy to customize:

After doing this, the initramfs would usually not contain the dm-crypt and cryptsetup modules, which was super frustrating to debug, but I'd usually go and edit /usr/share/initramfs-tools/hooks/cryptroot and force the hook to install the cryptsetup dependencies. The hooks have changed significantly, so this did not seem necessary in my Odin install, but on all of the previous elementary versions, I had to do this; I'd usually add an echo statement to the hook to emit a simple message indicating that it was, in fact, adding the modules to the initramfs.

Rebuild the initramfs via update-initramfs -u -k all.

At this point your initramfs and your actual machine config should be able to boot. However, we're not done, we need to update the kernel command-line to use arguments that were necessary to ensure the kernel knew that it needed to decrypt the root filesystem.

Note: I'm using rEFInd, you're probably using grub, so you'll need to look up the way to edit the grub kernel command line. I've had correspondence with Rod Smith and he's been extremely helpful in the past, can't recommend the bootloader enough, I wish it could be the default bootloader but everybody still uses grub.

Remember to replace the variables as you edit /boot/refind_linux.conf:

💪 Great! Now we should be able to boot, provided we got everything right. I often screw things up so I have to enter the installer, setup the chroot, try to fix things, update-initramfs -u -k all and iterate. Try booting the recovery option to see more of what the kernel is doing if you don't get boot right away.

Okay, so, as mentioned at the start, elementary OS Odin does not use ubiquity anymore, and from what I've seen, you basically cannot tell elementary OS Odin to do full-disk encryption or even user home directory encryption, which was unacceptable to me, at least. I lost about 8-10 hours trying to do the above with the Odin installer, and no dice, but I do have a booting system with full-disk encryption using LUKS.

In the end, and I really hate that I had to do this, but I essentially created a stage-3 ala Gentoo by destroying my LUKS container and having it create an unencrypted filesystem on /dev/nvme0n1p3. Still within the installer:

If you were able to do all of this, you should be able to get to boot 🎉, though I had to boot recovery a few times to fix various issues.

Well, Ubuntu has changed the way it does kernel command line arguments for LUKS, and uses a new shiny systemd configuration in the early initramfs stages to setup your LUKS container. The cryptopts argument seems outdated, and seems to protest using what I previously used, and so that led me down this rabbit trail:

There are new options starting with luks* that seem to supersede the old cryptopts parameter. I haven't gotten these working yet, but the man page does direct us to another interesting place:

It seems that what is implied here is that the actual initramfs is configured when it is created/updated that /etc/crypttab is finally actually used to embed configuration into the initramfs, so cryptopts may no longer be necessary, and using the option generates warnings for me at boot time. Maybe it just works, but I am unsure and I haven't tested it out yet, but I likely will do so in VirtualBox to see what is actually necessary.

To debug things, boot into recovery mode by omitting quiet splash from your command line and inserting recovery. If worse comes to worse, you can also tear apart the initramfs using unmkinitramfs /boot/initrd.img-$(uname -r) ./, which is what I'm doing right now.

My crypttab seems to be in the image, which is promising, but I'll only believe it when I see it actually functioning, I've seen things so my skepticism is pretty formidable.

In short, I documented above what used to work as a basis for getting things working again in Odin. What I have found so far is that there is no way in the installer to enable full-disk-encryption and I didn't see an option for user home directory encryption either.

As a result, I essentially ran the installer, copied all of the installed filesystem files to an external hard drive via rsync, created my LUKS container and filesystems etc., rsynced into the encrypted container, modified some essential files in a chroot, updated the initramfs, updated the kernel command-line, and I can at least boot now.

I'm going to try to do all of this in VirtualBox next to see if I can get a working boot without the kernel command line arguments, hoping that it just works™, but prepared for it to totally not work.

Not the answer you're looking for? Browse other questions tagged system-installation release-odin full-disk-encryption or ask your own question.