I've installed lm-sensors. I ran sensors-detect and said yes to each question. Here is the result:

I then ran sensors command. Here is the result:

I am not sure if any of this is correct, and do not know for sure what my temperature of my CPU is. I am running a AMD x4 860k CPU overclocked to 4.1 GHz with boost disabled and stock voltage of 1.356 VCORE. Ram is 2133 (profile_1 enabled) Corsair Vengeance Pro 2x4GB. GPU is Sapphire R9 270. Board is Gigabyte F2A88x-d3h. I am also using a Coolermaster Hyper Evo 212 on the CPU with a 92mm and 140mm intake fans on the front of the case as well as 92mm and 140mm exhaust fans on back and top of case. OS: elementary OS Freya.

My system seems to be running fine, but I really want to be able to check my CPU temp. Any advice?

Since you have already used sensors

If you use acpi -V you will get more information.

As a complementary info to the other answer - on how to display CPU temperature on the desktop: conky.

My idea is to use a very simple conky script to show the CPU temperature. And the simplest way to use this program seems to me Conky Manager.

There are some conky scripts already installed with Conky Manager (located in ~/.conky), which can be launched from Conky Manager, but they don't seem to display the CPU temperature. Many others can be downloaded from here or from other places like deviantart.com. But for my needs and for the purpose of this answer they seem too bloated.

My solution is this: as I was already using one of the conky scripts that come by default with Conky Manager in order to display CPU and RAM memory use, namely ~/.conky/TeejeeTech/Process Panel, I have edited that one to add the CPU temperature. 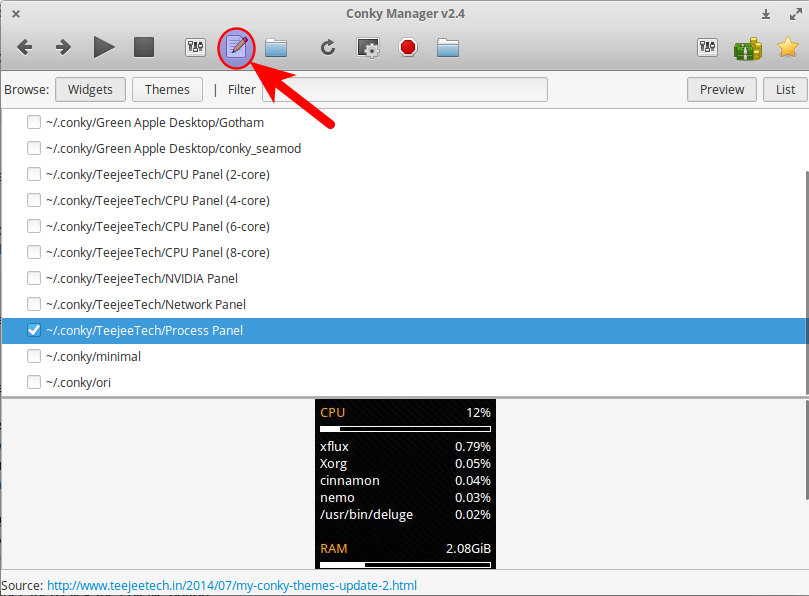 That should open the script in a text editor. At the end of the text, add this line:

Together with the rest of the script undet the TEXT paragraph, it should give something like this: 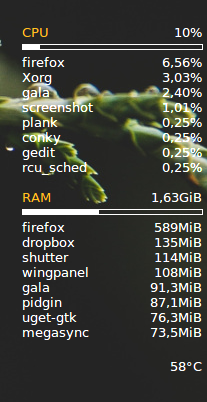 Or, instead, this line can be used, mimicking the default display:

If you only want the temperature to be displayed and not all the list of applications with info on RAM and CPU use, you may delete all or some of the lines under the TEXT paragraph and keep only the new line.

Or, you may want to add the temperature under the CPU part of the conky along the rest, etc.

All this can be tweaked by changing the lines and their location.

Not the answer you're looking for? Browse other questions tagged temperature or ask your own question.