One of my apps has a second, fuzzy icon in Plank. How can I workaround this?

I have a Google Chrome icon in Plank. After an update to Google Chrome, a second fuzzy icon appears every time the browser is opened:

How can I fix this?

Apparently this issue is fixed in Google Chrome v46. If you are still experiencing it, try upgrading Chrome.

1 If you are fixing this for a different program, you can find out which WM_CLASS your window has got when you type in a terminal:

and then click on the window. In case of Google Chrome the output is as follows:

For a different application it will be different, so the line to add will be like:

After adding the line, be sure you removed the previous launcher then start the application and right clicking on its dock icon check 'Keep in dock': just dragging & dropping the .desktop file onto the dock may still lead to a second launcher/icon appearing in the dock.

This is an issue with Google Chrome that affects multiple OSes and has been confirmed in Google's issue tracker. That said, you can work around it in elementary OS. 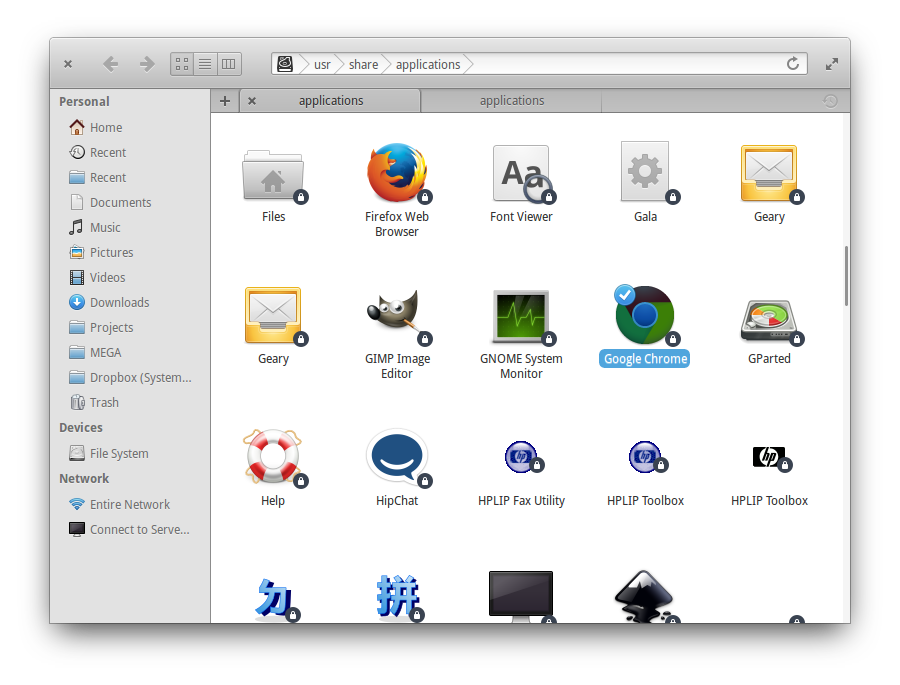 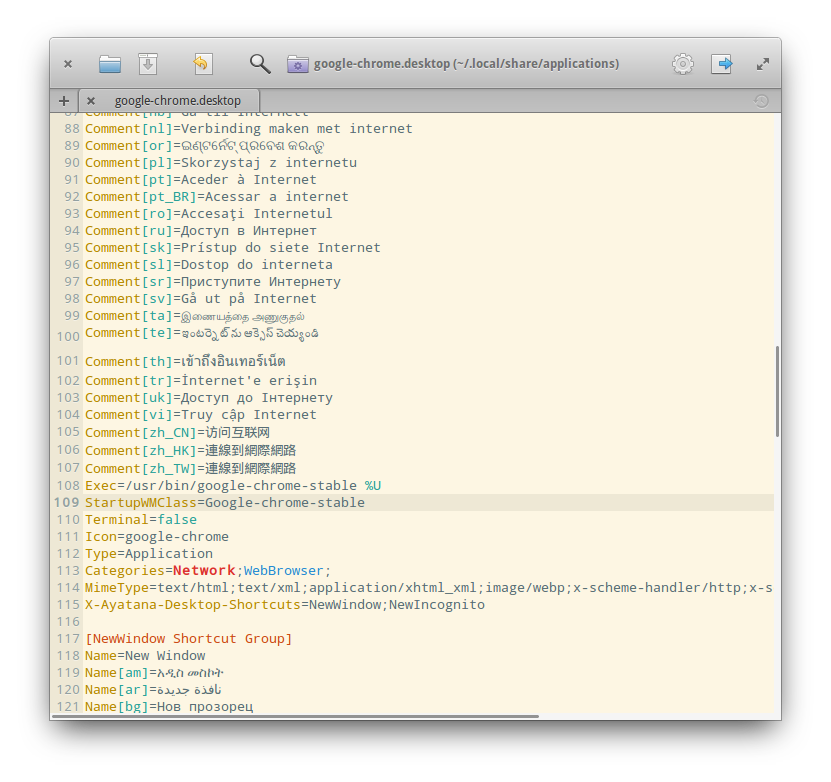 Here's a one-liner to fix the issue as described in Gabriel's answer:

To unpack and explain this command line a bit: first it copies (cp) the global .desktop file to your user directory, since the latter overrides the former for the current user, and isn't changed by package upgrades.

If that operation succeeds (&&), it then uses the sed command to do a find-replace operation, which follows the pattern sed 's/<find>/<replace>/<flags>' (where s stands for "substitute"). Step by step, here's what that sed command says:

This is a non-Chrome specific answer.

Many questions about other applications than Google Chrome have been marked as duplicate of this one, although this is about Google Chrome, because the definitive answer contains a general non-Chrome specific solution.

I had a problem that seemed a duplicate (and that I was about to post as a separate question) about other applications and I couldn't initially see the solution there in the middle of a large text about Google Chrome. Also, that solution was not in fact working for me (see below, case 3). So, I think that it could be useful to have a clear separate answer -- to which all those closed questions marked as duplicate (and others that will suffer the same faith) can be referred.

Also, there are variations of this problem

and posting those as separate questions may also lead to them being closed as duplicate; various way of dealing with these variations will be integrated in this answer.

So, the main source is the definitive answer.

The launchers in the Plank dock correspond to .dockitem files located in ~/.config/plank/dock1/launchers/. Each .dockitem file corresponds to a .desktop file. Such files (which are themselves 'launchers', as they can be executed to start an application) are usually located in /usr/share/applications or in ~/.local/share/applications (in this case the application can be found and launched with the Applications/Slingshot launcher), but they can be put in other places, thus avoiding them being changed back by an update (the downside of this being they cannot be seen in the panel Applications/Slingshot launcher/finder) To both find them in the Slingshot and keep them after update, ~/.local/share/applications is the best location.

[Case 1 - where the second icon is identical to the first, but fuzzy]

The solution in the main answer is to edit in a text editor the .desktop file that launches the application. That should fix the problem no. 1 above.

To find the proper form of Name-of-application, start your target application and then open terminal and run

The cursor becomes a cross, click the window of your target application.

In the terminal you should see something of the form

Add that name to the line and paste the line in the .desktop file somewhere for each of the three sections in the file: [Desktop Entry], [NewWindow Shortcut Group] and [NewIncognito Shortcut Group] (for example, at the end of each section).

[Case 2 - where the second icon is not identical to the first, but is just a generic icon that lacks an image]

The OP of that question has posted this in a laconic answer: Finally, there is a simple way to fix this: simple change the icon file from webide.png to webide.ico, or using this useful app to edit the menu: https://apps.ubuntu.com/cat/applications/precise/alacarte/.

I cannot verify, but it looks very far from the solution accepted under this question to which that was flagged as duplicate. (So, I flagged that one for re-opening.)

This happened to me when I have created a .desktop file to launch a static beta version of DeadBeeF, the stable (non-static) version of which was installed at system level, and then dragged & dropped that file onto the dock. When starting the program from the dock launcher a second identical icon appeared.

That second icon had the same option upon right-click as the first. Checking 'Keep in dock' for the second icon/launcher and un-cheking that for the first, and then launching the application from it, there would be no second icon but the stable version would start instead of the static one. Keeping both on the dock and starting the application from both, alternatively, they will start each its own version, but only the launcher of the system-level installed version will be underlined in Plank.

Indeed, at this point, looking in ~/.config/plank/dock1/launchers/, one of the .dockitem files present would be referring to the .desktop file in usr/share/applications launching the main stable version.

This case was the result of the fact that a version of the same application was installed at system level. Un-installing that from system level (completely, or using a static build for that too) would have also fixed the problem.

After upgrading to version 46.0.2490.71 and above you may experience this problem again. This problem occurs because WM_CLASS has been changed on google-chrome.

Based on waldyrious's answer, fix it easiest way:

I changed mine to

After restarting Google Chrome the icon was all shiny and nice :)

Not the answer you're looking for? Browse other questions tagged applications plank icons google-chrome or ask your own question.

3
How to fix Netbeans 8.1 double icons on plank
2
Android Studio Blurry Second Icon on Plank
3
App icon is not merged in the dock
2
How to fix double icons on plank (specifically Photoshop in wine)
1
Plank Has Fuzzy Secondary icons
1
Problem with double icons in Plank dock
1
Duplicate icon of Wing IDE
22
How to remove old kernel versions?
5
How Can I Disable Chrome's New User Menu?
9
Certain application icons does not show up in dock when opened
See more linked questions