How to connect to Elementary using X2GO?

I would like to use x2go to connect to my Elementary OS machine, but don't know what session type or custom session to use. 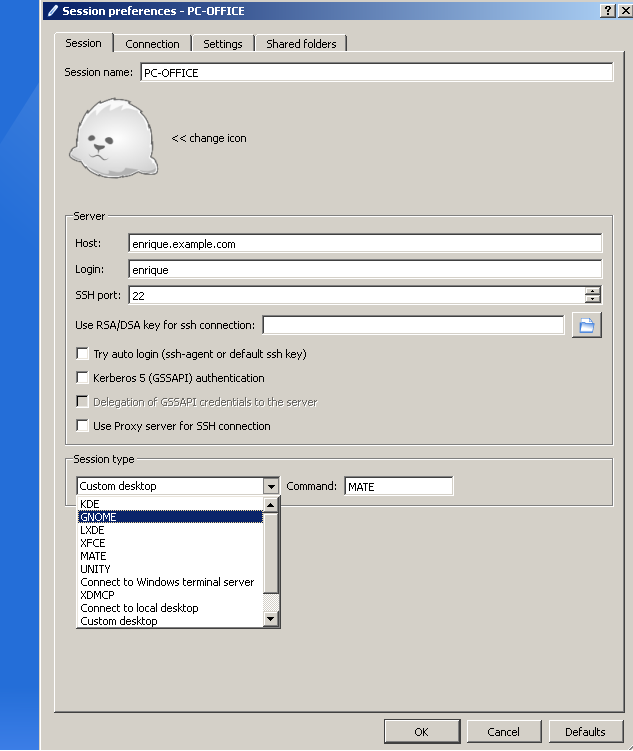 As per x2go Client's "Desktop Environment Compatibility" page, Elementary OS's "Pantheon" shell (of the Gnome Desktop Environment) is officially not supported. You could open a new bug report with "wishlist" severity, following the instructions here. It won't be easy to support Pantheon, because there's already other rather difficult problems blocking x2go client's support of the newest Gnome versions.

Another option might be to install a second desktop environment (such as XFCE, or LXDE, which x2go client fully supports) on your Elementary OS box, alongside Pantheon. But that would be a kludge, and I wouldn't be surprised if you encountered many problems and annoyances, because XFCE and LXDE wouldn't use Elementary's "switchboard" technology. Elementary OS strongly assumes you'll use Pantheon, and only Pantheon. You can't choose between DE's at the lightdm login screen, for instance.

If x2go is crucial for you right now, consider switching to a Linux distro such as LXLE, which uses LXDE from the get-go. Just like Elementary, LXLE is designed to be very lightweight.

Not the answer you're looking for? Browse other questions tagged networking or ask your own question.

4
Cannot connect to network - Keeps asking for Password
1
How do I connect to two networks (wired and Wi-Fi) at the same time?
1
Connect to network share on startup
0
How to connect HP6700 wireless printer to Elementary Loki
0
How to make the network uninterrupted when the system is locked on elementary os