Games installed through GOG do not work, but Steam games do

Alrighty, I have a serious super important mega critical issue; dear god someone help me. My video games don't work! Okay some do, if I install a game using Steam, they always work and run without a hitch.

However, if I download and install a game, any game, through GOG, they do not work. The icon pops up but nothing happens and the game crashes. I am not sure what to do here as games do work through Steam.

Here are the games I have tested:

This is a late answer, but I'll try to help in case you're still having this problem or if someone else stumbles upon this page. :) Note that this might not be a recommended or most optimal way of solving these kinds of issues, but it's how I do it.

This can indeed be the case. You can enable the installation of 32-bit versions of packages by running this command in the terminal:

This needs to be enabled for the following to work.

So, next I'll show you GOG's version of Crimsonland as an example. It did not launch right away, so I ran it through the terminal. You can launch a terminal in the game's folder by navigating to it in Files (Home -> GOG Games -> Gamename), right-clicking the file area and choosing "Open with an application -> Terminal". Then run the command ./start.sh as in the following image. Most, if not all, Linux GOG games are run via the file start.sh 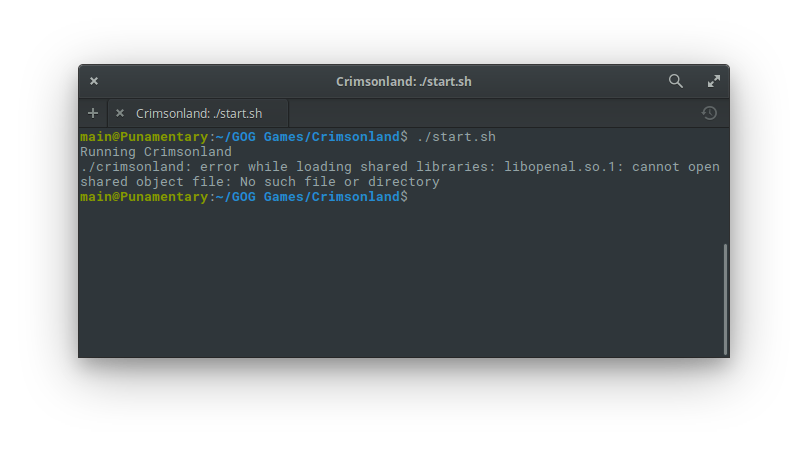 Notice that the error message shows the name of a library: libopenal.so.1

Now you need to figure out what package this might relate to. I searched for libopenal by using the Synaptic Package Manager application available on the elementary AppCentre. I found a package called libopenal1 of which the 64-bit version was already installed. I decided to try installing the 32-bit version of it as well.

I closed the Synaptic Package Manager and issued the following command on the terminal:

Notice the important part: I put :i386 at the end of the package name. This means that I am asking apt to install the 32-bit version of the package.

I proceeded with the installation and afterwards tried starting the game again. It worked!

Not the answer you're looking for? Browse other questions tagged applications games 64-bit 32-bit or ask your own question.