Unable to boot into Windows

Initially I had Ubuntu 14.04 LTS along with Windows 10. I wanted to remove Ubuntu and install Elementary OS. So, my friend ran sudo rm -rf / --no-preserve-root and then it started removing a lot of things. Suddenly it stopped showing progress (or that is what I felt), so I turned off the computer. When I tried booting it, it started checking for hardware malfunctions and it said "No hardware malfunctions, OS image might have been corrupted or USB boot is not setup in BIOS."(not exactly sure of the error message, it was somewhat like this). So, I tried to go the BIOS setup menu. Here, I restored the setting hoping this would allow me to boot to Windows. This attempt was unsuccessful.

Then I tried installing Elementary OS using a bootable USB. I was able to install on the partition containing Ubuntu by formatting it. After successful installation I rebooted and was directly led to Elementary (without any grub page). On mounting Windows partition I found all my files were intact (as far as my knowledge goes).

Then I noticed that line 7 in /etc/default/grub was GRUB_HIDDEN_TIMEOUT=0 rather than #GRUB_HIDDEN_TIMEOUT=0 (the one in my friends file). After commenting this line, updating grub and rebooting, the grub menus was back although there was no option to boot to Windows. The link to the image of this menus is has been posted as a comment below (since I can't post more than two links in the question due to lack of reputation)

Now, we checked the /boot/grub/grub.cfg. Here, there was a difference in line 270 onwards when compared to my friends file. These are shown below: 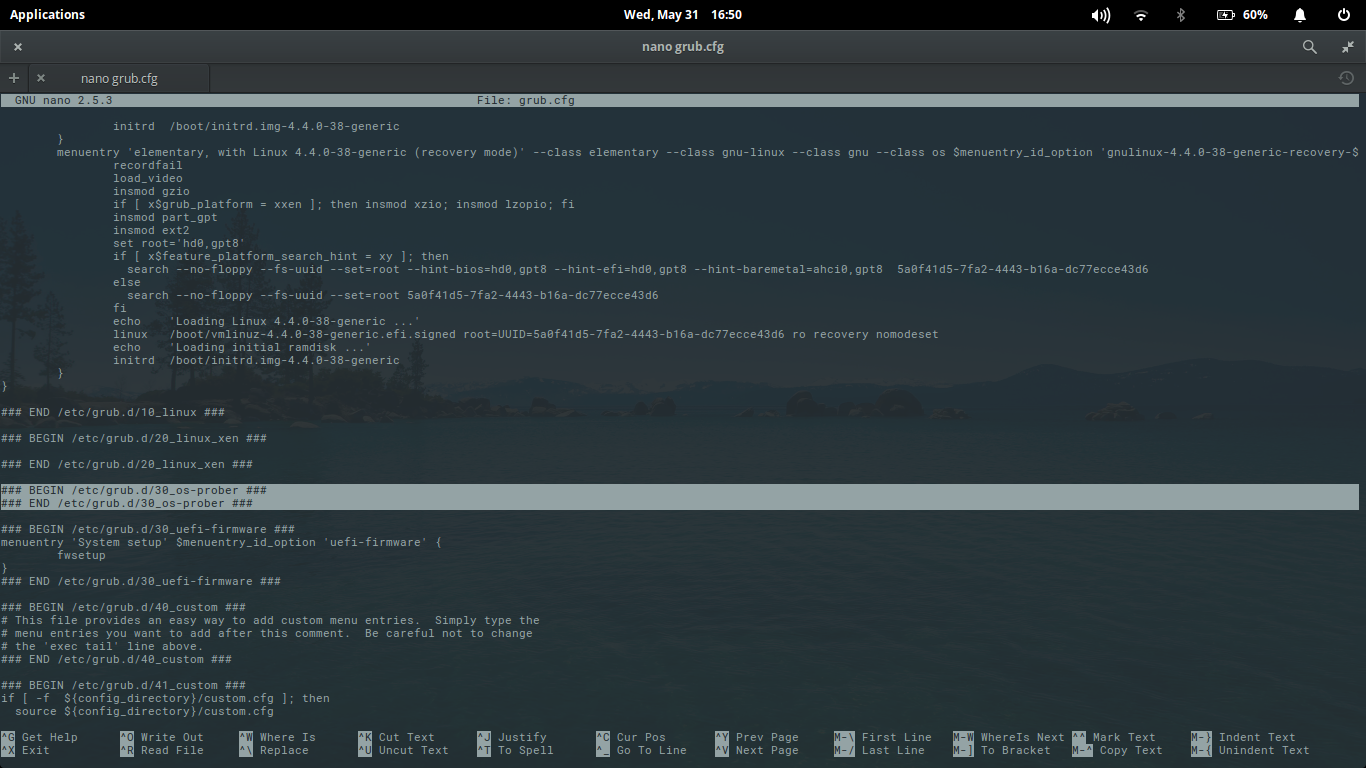 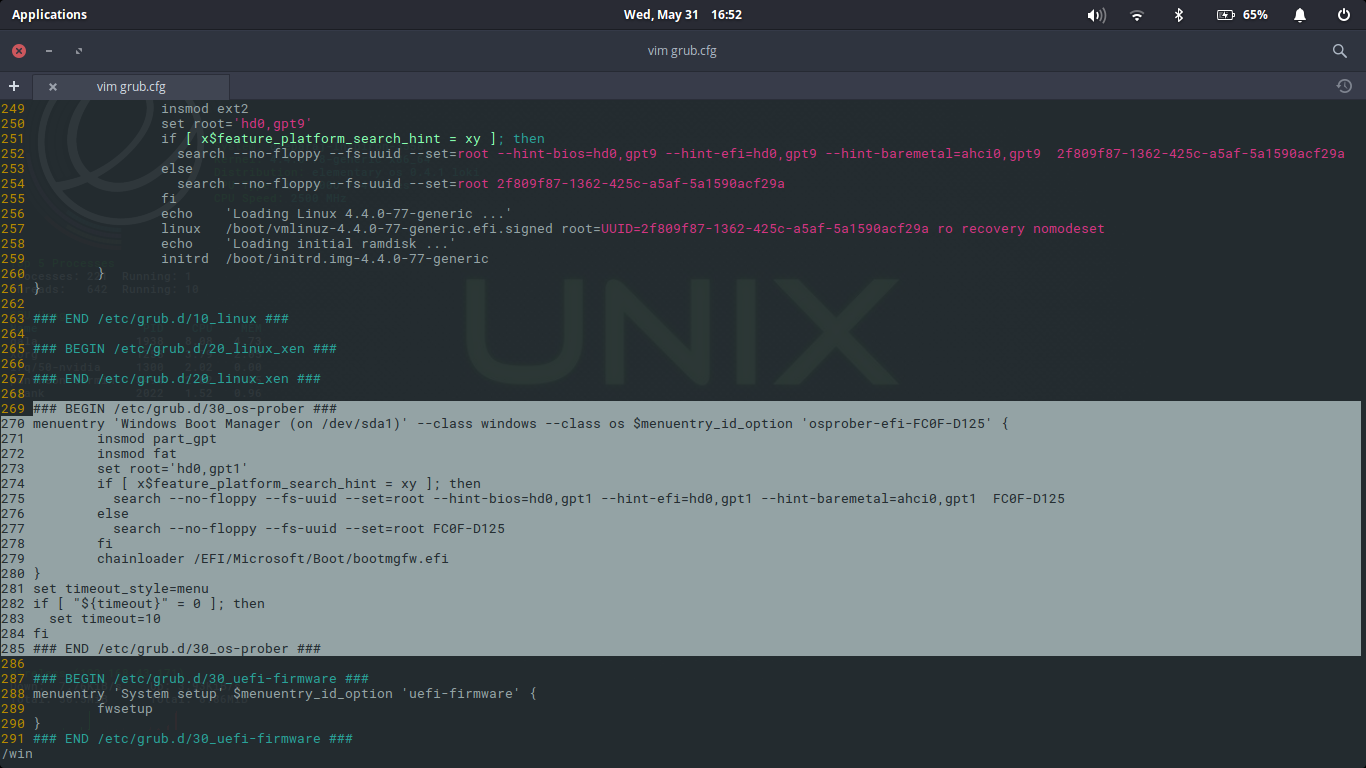 Now, as you can see, some lines are missing in my case. Also, line 254 in my friend's file has different numbers when compared to the corresponding line in my file, I decided not to copy the missing lines or change the file (as it also said in the beginning not to edit the file).

On googling, all the situations had the problem of not being able to boot into Linux rather than the other way round.

So, I'm posting this question here: Can you suggest any way to add the Windows boot loader option in the grub menus?

dual-boot grub microsoft-windows
Share
Improve this question
asked May 31 '17 at 13:03

There's no way to repair the windows boot loader from linux and trying to code that is useless because the disk ID is something that is unique, believe me I tried hard.

You must do a windows pendrive to fix the bootloader(do it from another windows machine because linux doesn't handle fat32 too well), because you deleted ubuntu's grub, the disk ID for the windows partition lost, and then you overwrited that, putting elementary on it, so that's why linux can't detect your untouched windows partition.

What you can do is download the Windows 10 ISO and use the "repair option" that is in the first screen after booting up the usb key as you can see here : 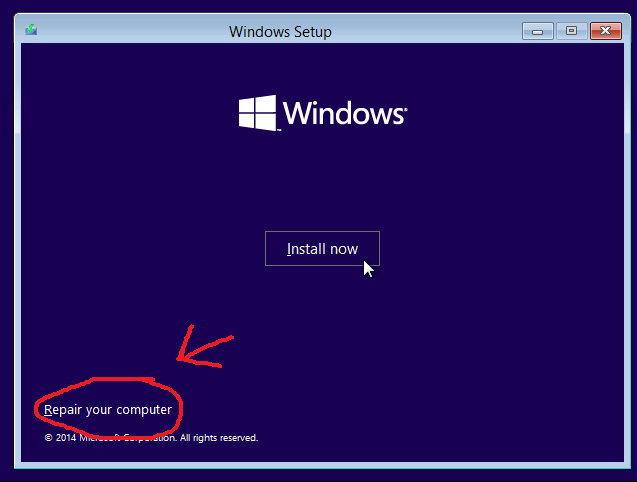 When entering the repair option, go to Troubleshoot -> Advanced options -> Command prompt and type this in the console to fix the bootloader.

with that done, you will be able to boot windows, but you deleted the grub menu so for fixing that launch the elementary os as live image and open a terminal SUPER + T and write this

the lsblk command is used for seeing the disk partitions, you must see the name of your disk, I'm assuming that your disk is called 'sda' with that done you will fix all your problems, good luck and google more

Not the answer you're looking for? Browse other questions tagged dual-boot grub microsoft-windows or ask your own question.

1
Installation to USB put grub on my hard disk and changed boot parameters
1
"unable to install grub in /dev/sda. This is a fatal error."
0
Slow boot after reinstalling GRUB
0
Issues dual-booting Elementary Freya and Windows 10
1
cant boot into windows after dual booting elementary OS hera
1
Windows 7 does not boot after installing ElementaryOS 5.1
0
Windows Boot Manager loops back to GRUB

// TODO sg: TMP solution until we are confident in our current implementation of async imports // once we are, we can move the if into the js entry file and dynamically load the mark obsolete module