Why doesn't elementary OS include an Office suite?

Why doesn't elementary OS include an office suite by default? You can find a reference to the issue here.

The official stance currently that they don't really need a full suite themselves, nor do they want to ship an office suite that isn't theirs. Until then, there are several third party options (see below). For my personal opinions, taking the near-ubiquitous Microsoft Office as an example, it comes with:

Each of these require individual analysis, so let's get to it.

The writing application is probably the most conventional piece of software, and yet surprisingly rarely used. Simple documents are written occasionally, but not regularly enough that it was a major issue this cycle, although it has been looked at by the community (see below), the issue of compatibility (which permeates this question) will no doubt rear its ugly head.

Spreadsheets are commonly used in the workplace, but far less at home (unless you log every transaction you make, like some kind of weirdo), and elementary is definitely not targeted at the business market right now. Definitely not a priority.

Another predominantly business application, and certainly something home users (if not everyone, who likes those meetings?) could do without.

I'm not entirely sure what OneNote does, but it isn't used on any of the hundreds of machines I administer. It seems to be searchable sticky notes, and it's been opened 3 times by people so far this year, 2 were auto-launching at startup, and one was because they were curious what it did.

I have two things to say about this:

Yet another "business" application, back in the days where you needed to design leaflets and posters, I think this is mostly a bygone as well, plus extremely specialist, speaking of which..

Access is a format for what is effectively a proprietary version of SQLite, a is a system often employed for quick-and-easy databases that rapidly move into multi-user territory that it is simply not designed for. A poorly defined piece of technology is worse that a buggy piece of technology, and most users will have no user for this. Microsoft do not even include this in most Microsoft Office versions.

Many people seem not to know this, but Microsoft provide free online versions that do almost as much as local ones do, notably lacking macros but not much else.

Google provide a wide array of tools for working with documents, spreadsheets, and slideshows and support converting to and from Microsoft Office format, and is now being recommended by some universities. A major upside is you don't need to install or even save things, it's all just online.

LibreOffice has come to be the de-facto option for open-source office tools, and for very good reason. If you want offline software, with the option of theming it's way into elementary, this is the one for you.

Kingsoft Office 2013 is very Microsoft Office like, but alphas are available for native linux use and provide reasonably good compatibility, but very little elementary tie-in.

There is a great mockup for a Writer on Deviantart by spiceofdesign that is absolutely gorgeous, and did have some code written as a third-party application, but was never official. There's been nothing done there for a couple of months, but it seems to have a significant amount of the groundwork laid. 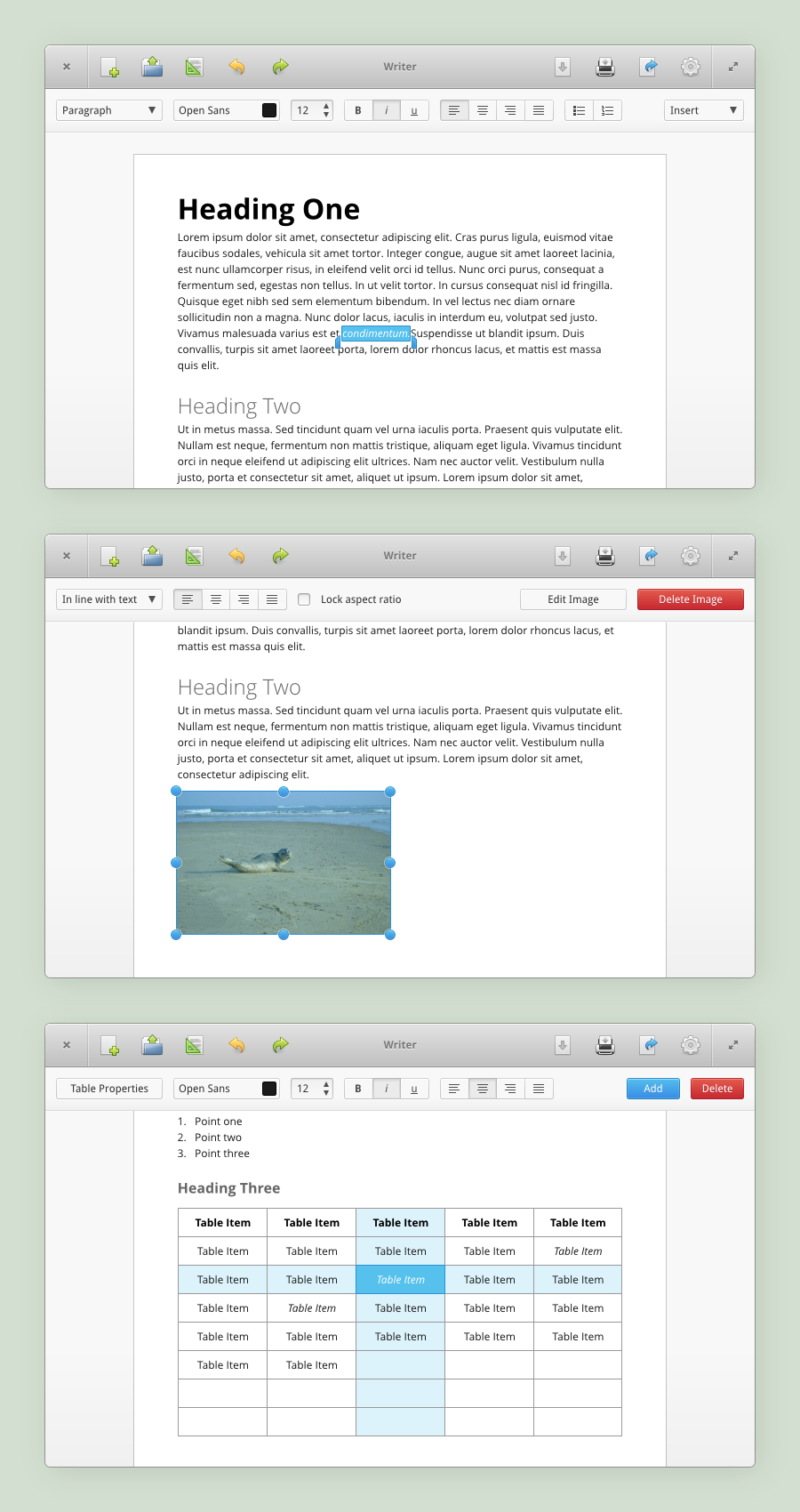 elementary's policy is to ship default apps that comply with their design guidelines, which integrate with the desktop environment in the smoothest possible way.

None of the office suites out there - and certainly not Libre Office - do that, so it only makes sense not to include any office application by default and let the users free to install the one that best suits their needs.

Developing their own office suite is not something which can be accomplished in the foreseeable future, since that would take a lot more workforce that they can currently afford.

Not the answer you're looking for? Browse other questions tagged applications office or ask your own question.