My iPhone (5S, iOS 10.2.1) is recognized in the Files and Photos applications (it appears in the side bar in each) but neither can access the photos on the device. I am doing the following:

In Files, I see a single folder on the iPhone, store_00010001, but it shows as empty in Properties and when I click to view contents (see below).

Photos gives me the error shown further below. Can anyone indicate how to troubleshoot these issues? (I'd prefer to simply get access through Files, as I don't like photo manager software). 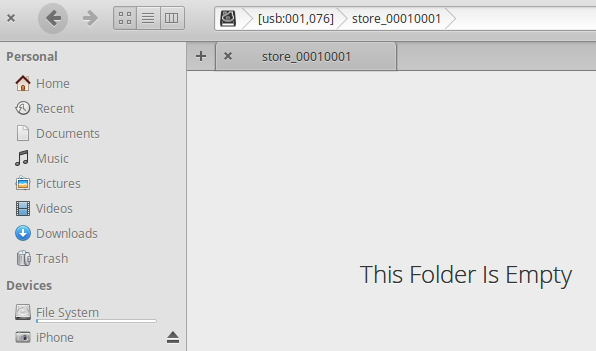 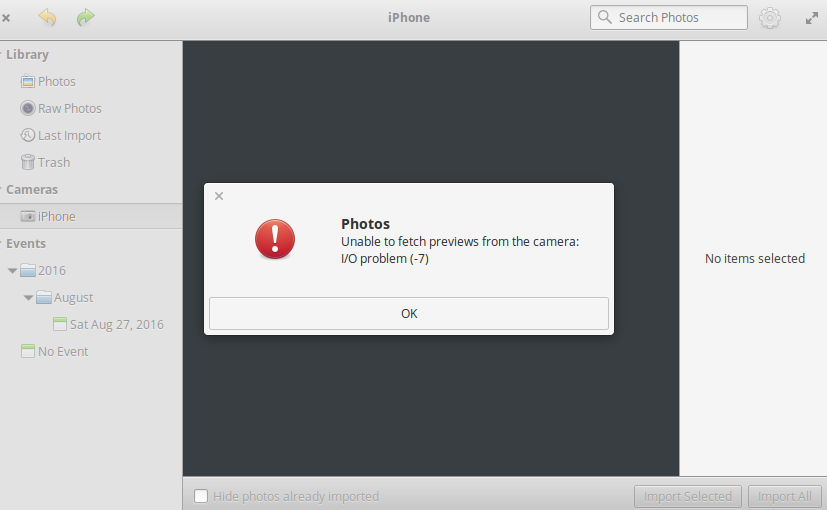 This is a workaround, not a solution

Now, in the iOS Photos app, you should be able to select your photos, then touch the Share widget at the bottom-left corner.

Select "Send to Files" as the action you want to take (should be in the bottom row, among the black-and-white icons), then drill down to Dropbox | New Pictures as the ultimate destination. Touch "Add" in the top right corner.

Within the next few minutes, your images will start appearing in the Dropbox folder on your PC and you can import them into whatever app you like.

Yes, it's a kludge, I know, and it is irritating that with a billion iPhones floating around we can't just plug them in and expect them to work. Well, You'll have to talk to Apple about that.

On the bright side, this workaround does not require you to plug your phone into your PC. It will work from the other side of the world!

I have a simple and effective solution, and I recommend using this. There is a program which uses a trusted Apple key to access iPhone files. It's called ifuse, and it's on the Ubuntu repository. Just enter on the terminal: sudo apt install ifuse. After installing, reboot and try to mount the iPhone again.

Not the answer you're looking for? Browse other questions tagged release-loki usb iphone or ask your own question.